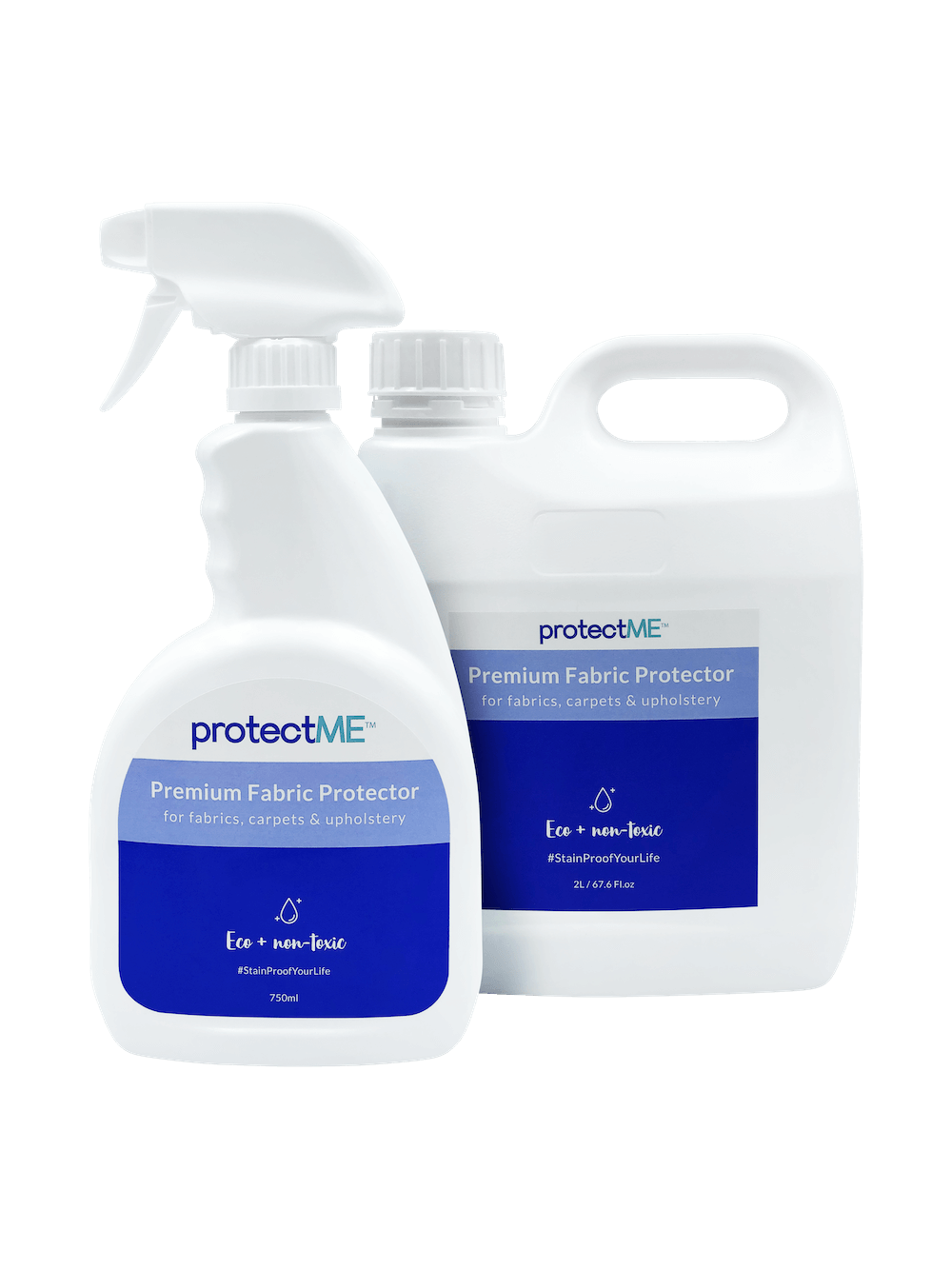 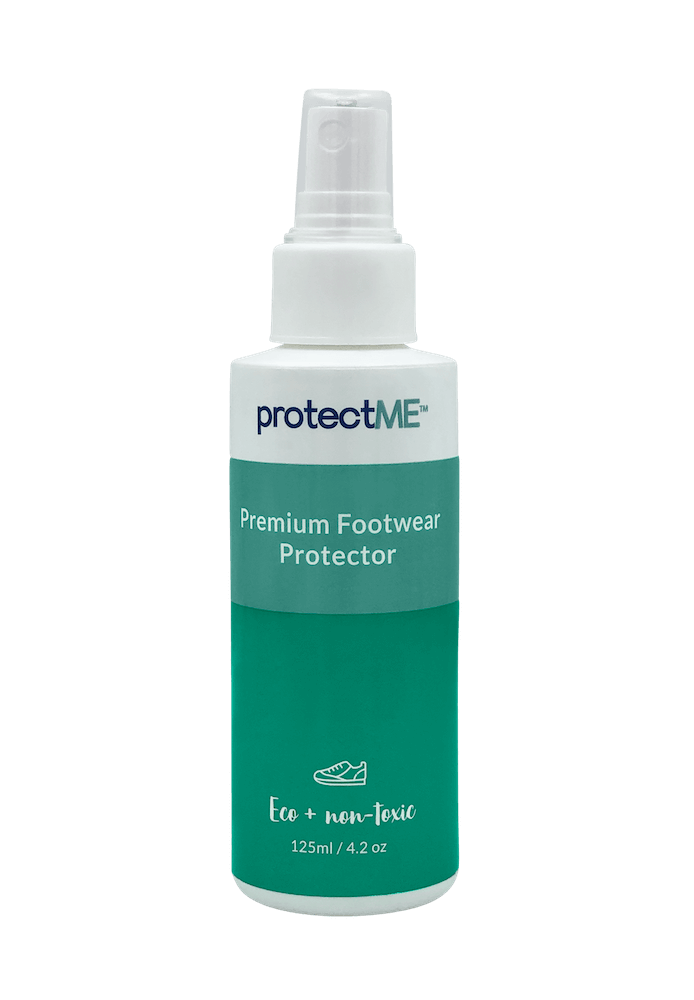 Protect your fabrics the safe way

for your family & for the planet.

How to protect a jute rug

How to protect a velvet couch

We are a conscious brand because we care

about ethics & our future.
Get to know us

Say goodbye to stains and hello to a carefree life with our non-toxic, water based fabric protector. Formulated with natural ingredients, this stain guard is not only more efficient than traditional chemical waterproof sprays, it’s also much, much safer for your family, your kids and pets. Plus, it’s also environmentally friendly and won’t hurt the planet. What’s not to love?

protectME is completely harmless to our bodies & the environment. It’s safe for everyone, kids, pets & allergy sufferers included.

We are a conscious brand because we care. Our products are made without animal testing & do not include animal products.

We are aiming to lower our environmental impact. Our bottles are made of BPA-free plastic, fully recyclable, including labels.

protectME is a waterproof spray that can be used on any fabric or upholstery item, around the house or for commercial use. How is it different from traditional stain guards? It is water based, making it eco friendly and non toxic; whereas other fabric protectors are formulated with highly toxic chemicals.

Eco friendly doesn’t mean inefficient: our tests have shown that it is actually more durable than regular fabric protectors. It is resistant to abrasion and machine washable (up to 30 washes).

protectME is an invisible and breathable protective coating that repels and protects from liquids, dirt and stains whilst still allowing items to look, feel and smell natural. You can use it on cotton, suede, leather, synthetics, wool and silk. Bonus: you won’t have to leave the room for 24 hours after application, it’s odourless!

Formulated with top experts in nanotechnology all the way from Germany, protectME is made in Australia: we are a family business based in Melbourne, with years of experience in the eco friendly cleaning industry.

What our customers say about us

from 402 reviews
Excellent - works a treat on an upholstered lounge

I was attracted to the fact that this is a non-toxic product and when discovering that it is also Australian made, I was sold. I was horrified to learn of the chemicals in that other big name brand and although I’d never heard of this company, it was an easy decision to trust my gut and take a punt. I’d just bought a new couch which being a light grey isn’t the most forgiving colour so I wanted to protect it the best way possible. A waterproof fabric protector was the only way to go! I was a little scared on the day of application, this was a brand new couch and I was about to use something on it that I’d never tried before or even heard of. It did take some time to get a good technique going and I may be a good example how a very bad technique will still produce a great result.

Long story short, I absolutely soaked the bigger 3 seater to the point of dripping. I actually thought I’d ruined it but held on to the thought that all would be OK when it dried. Even when I’d realised I was overdoing it, I continued with the heavy handed technique to at least keep it consistent in-case it dried unevenly. I was much more conservative on the 2 seater, took my time and had a much better technique going. I was convinced the 2 couches would be different shades of grey but figured I could live with that.

Still thinking I’d ruined it, I gave it all the best shot by propping each individual cushion on anything I could find to allow them to dry thoroughly. Along with the upholstered frames, the couches were both made up of removable cushioned bases, back and sides, 14 in all.

The next morning I was relieved to see that they were all drying beautifully. They were still a little damp but the colours were adjusting back to the original grey. By that evening they were dry enough to set up but as I wasn’t in any hurry, I left it for a couple more days. When fully dry, the fabric was in exactly the same condition as the day I received it. It brushed up when running a finger across it, there was absolutely no sticky residue (something I feared would happen), no colour differences between the two couches even though I’d used twice as much product on the first one. There were also no lines or marks where the cushions were resting on the props (something else I thought would happen). It simply dried clear and was basically invisible. When my son water tested it, the water simply beaded and fell off. Perfect!

So a big yes to recommending this product! I bought the 5 litre with the gun, the only way to go I think when doing a couple of couches. It has no smell, is very easy to apply and produces an excellent result even when a very bad, heavy handed technique is used. Let me be an example of that.

I have nothing but praise for this product but what I would love to see is a little more guidance on the website on application techniques as I think this is important for 1st time users. We are using this product in order to protect often costly purchases and it’s an awful feeling when you think you’ve single-handedly just ruined one. Something to refer to when you think things are going bad would provide reassurance and peace of mind.

Applied ProtectMe. Didnt affect the colour in any way. Also had no smell to it. I put some water on it to check and it beaded straight off. So please Atm will see how it goes after a while

I used this to safeguard all my fabric couches and chairs! Did a patch test after that and was amazed at the result. Another plus point is, it doesn’t smell!

I haven’t really even been convinced that previous fabric treatments I have previously purchased actually did anything at all. We are currently recovering some MCM dining chairs in a felted wool upholstery. We teated the fabric prior to reassembling the chairs. Before treatment, water just soaked into the fabric. After treatment, the water just ran off in droplets. The fabric still feels the same and looks the same … but now it has an invisible suit of armour protecting it from the inevitable accident. Amazing stuff 🙂

I was looking for a cost effective way of protecting my couch and came across this product. Once dry, it's undetectable - doesn't stain or leave a noticeable film or scent. Very happy, thank you!

Awesome product! Did exactly what we had imagined! Within a day of using it already recommended this product to family and friends! Will always be using ProtectMe from now on 🙂

This product was a no brainer for me. Easy care for my new upholstery bouche dining chairs in ivory, was giving me anxiety. Now I have piece of mine, my chairs are not going to stains at every touch and safe enough for my cat to sit with us. I did 2 coats and air dried it to the touch. Fingers cross xx I have faith

Nice product well made very happy with my purchase

Easy to apply with auto spray unit, drys quickly and didn’t affect colours of fabric. Arrived promptly with everything required including batteries for the spray unit which was very handy. 2 weeks in and no issues. No smells and seems invisible once dry. Will be ordering more for a rug, chairs and bench.

This product does not produce a toxic smell like others, which provides peace of mind that we aren't breathing in poison. The applicator gun makes applying the product super easy.

Even after just one coat, water was already beading off of our lounge cushion covers. The smell of the product is not as overwhelming as other highly toxic products.

Thank you - delighted with the positive results from your eco friendly product.

As a return customer, this is a fantastic product, does everything it is sold to do!! Buy it and follow the instructions and you won’t be disappointed! Great customer service too. Thank you

Stain proof pretty much anything

protectME is a waterproof spray that can be used on any fabric or upholstery item, around the house or for commercial use. How is it different from traditional stain guards? It is water based, making it eco friendly and non toxic; whereas other fabric protectors are formulated with highly toxic chemicals.

Eco friendly doesn’t mean inefficient: our tests have shown that it is actually more durable than regular fabric protectors. It is resistant to abrasion and machine washable (up to 30 washes).

protectME is an invisible and breathable protective coating that repels and protects from liquids, dirt and stains whilst still allowing items to look, feel and smell natural. You can use it on cotton, suede, leather, synthetics, wool and silk. Bonus: you won’t have to leave the room for 24 hours after application, it’s odourless!

Formulated with top experts in nanotechnology all the way from Germany, protectME is made in Australia: we are a family business based in Melbourne, with years of experience in the eco friendly cleaning industry.

Find out the latest about our products & be in the know about living a non toxic life. 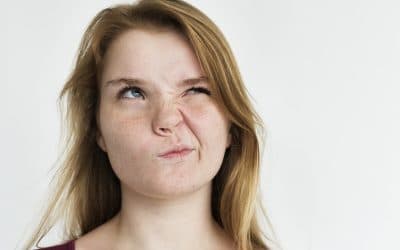 Is Scotchgard safe? It’s a question asked more and more frequently, given the increased awareness surrounding toxic ingredients in fabric protectors. While the safety of Scotchgard and its fellow brands remains (literally) up in the air, new and improved methods of...

END_OF_DOCUMENT_TOKEN_TO_BE_REPLACED 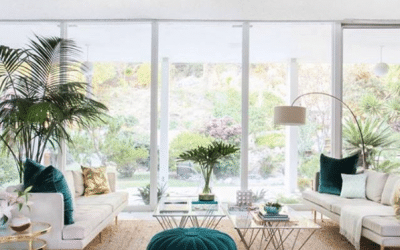 Hemp, sisal, seagrass and jute rugs are talk of the town in 2019 and there are no questions why. These natural looking rugs are not only stylish and eco-friendly, but they’ve also been hailed the saviour for households with allergy sufferers, children and pets. We...

END_OF_DOCUMENT_TOKEN_TO_BE_REPLACED 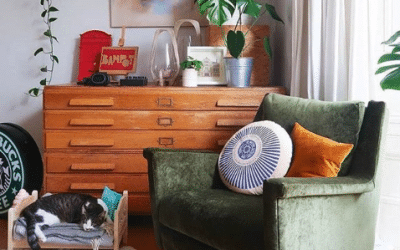 Microfibre, velvet & suede couches: why clean when you can protect?

You’ve just purchased the perfect new couch. Perhaps you were hesitant about committing to suede or microfibre, given their reputation taking to stains and spills. Nonetheless, you bit the bullet and purchased the couch that was calling your name. What happens next?...

END_OF_DOCUMENT_TOKEN_TO_BE_REPLACED

We are a family owned Australian business, based in Melbourne. We are a conscious brand because we care: about the planet, about your health, and about making our products as ethically as we can. 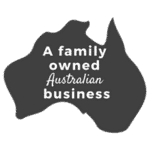 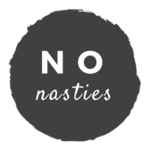 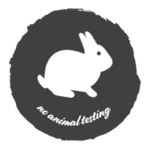 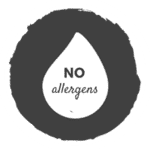 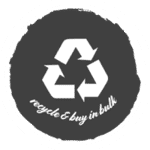